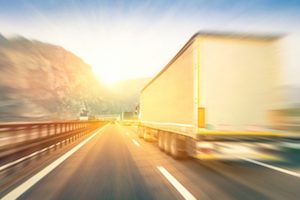 Our truck accident attorneys review cases every week in which large trucks, exceeding the posted speed limits or traveling too fast for conditions, have been responsible for serious injuries and deaths.

We have previously blogged concerning the organization, Road Safe America, located here in Atlanta, Georgia, describing the excellent work they do in attempting to make the nation’s highways safer. Road Safe America has been leading a campaign to influence federal transportation officials to promulgate regulations requiring devices on commercial trucks to limit their top speed to 68 mph. Interestingly, the idea is supported by many large trucking companies and opposed by many smaller independent carriers.

Data for the year 2005 revealed that truck accidents involving large trucks and/or tractor trailers killed 5,212 people. Of those, 803 were truck occupants, 3,944 occupants of other vehicles, and 485 pedestrians or bicycle riders.

Steve Owings, founder of Road Safe America, whose son was killed in a big rig accident in 2002, has enlisted the support of the American Trucking Association for his effort to limit the speed of large trucks on the nation’s highways. The proposal has already been approved by the Governor’s Highway Safety Association, which advises states on traffic safety issues. The Governor’s Highway Safety Association Board of Directors found the speed limit proposal to be “very reasonable”.

Most independent truckers oppose the idea because it would force them to drive slower. As we have blogged before, in the trucking industry, miles covered equals money earned. Therefore, the incentives are for independent truckers to drive faster speeds to cover more miles in order to earn more money. Road Safe America supports hourly pay for truck drivers as well.

Many of the large tractor trailers on the road today are already equipped with ECM devices which could be easily programmed to act as governors, limiting the speed the big rigs can travel. We feel this is an imminently reasonable proposal, which will more than likely save many lives every year on the highways.