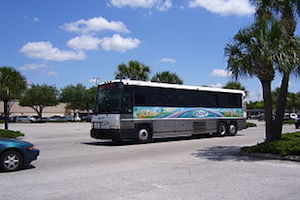 Many times when we talk about “trucking accidents,” we’re referring to those behemoth semi-trucks and tractor-trailers that we see so frequently on the highway.

However, our Atlanta truck accident lawyers understand that concerns have been raised with regard to other larger commercial vehicles, including motor coaches and large vans.

These are essentially buses or bus-like vehicles used to transport 15 or more people for varying purposes, such as sightseeing or day trips or trans-state travel.

Now, the Federal Motor Carrier Safety Administration says it has spotted a dangerous trend on these vehicles: Overloading. They’re crowding in as many people as can possibly cram inside, and that, combined with all the passenger luggage, is creating a tipping point for the tires.

The agency has issued an advisory warning motorcoach carriers and companies of max weight limits, saying that failure to heed the recommended limits as spelled out by tire manufacturers is putting lives at risk.

According to 49 C.F.R. 393.75, motor carriers are legally forbidden to exceed the weight capacity, and they’re also barred from operating a motorcoach that has tires that could be worn or damaged.

Of course, the prohibition applies to ALL motorcoach operators, but in particular, the federal agency has seen it be a major problem for double-decker motorcoaches.

The problem may at least partially be a design flaw. According to government researchers, one configuration has a gross weight vehicle rating of somewhere between 53,000 and 61,000 pounds. However, when a double-decker bus is fully loaded with passengers on top and bottom, the weight can easily exceed that.

It is, however, the motorcoach operator’s responsibility to ensure passengers are as safe as possible – even if that means losing some revenue by turning some passengers away or declining to carry their luggage.

What happens when these buses are overloaded, in addition to the faster deterioration of tires, is that the vehicle becomes more likely to overheat and fail. This puts peoples’ lives in jeopardy. Overheating has been a particular concern this summer, as many cities have recorded record heat waves.

If the FMCSA is called to investigate a claim of overloading or excessive tire wear, it may actually declare the vehicles and/or the carrier to be an imminent danger to the road, and can order it out of service under 49 U.S.C. 521.

Of similar concern are the 15-passenger vehicles often used by day cares, churches and some after-school groups. The National Highway Traffic Safety Administration released a report earlier this year indicating that these types of vehicles are also prone to overloading, which could dramatically increase the risk of a fatal roll-over.

Some things to keep in mind with regard to 15-passenger vans are: