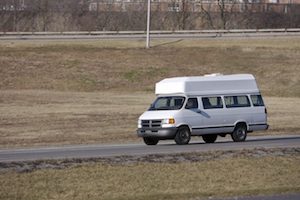 Van accidents continue to be a major cause of death and injury on the nation’s roadways. Our Atlanta injury lawyers are keenly aware of these dangers. Fifteen-passenger vans typically have seating positions for a driver and 14 passengers. They are widely used by community organizations to take members on short trips and outings. Colleges use them to drive sports teams to intercollegiate games and vanpools use them for commuters.

Recent research conducted by the National Highway Traffic Safety Administration (NHTSA) has found that the risk of a rollover crash is greatly increased when 10 or more people ride in a 15-passenger van. This occurs because the passenger weight raises the vehicle’s center of gravity and causes it to shift rearward. The van then has less resistance to rollover and is more difficult to control in an emergency situation. Placing any load on the roof also raises the center of gravity and increases the chance of a rollover.

A rollover crash is a complex event. In studies of single-vehicle crashes, NHTSA discovered that more than 90 percent of rollovers occur after a driver has lost control of the vehicle and has run off the road. NHTSA identified three major situations which led to rollover accidents in 15-passenger vans.

In the last ten years over 80 percent of people killed in rollover crashes in 15-passenger vans were unbelted. Seat belt use is especially critical because large numbers of people die in rollover crashes when they are partially or completely thrown from the vehicle. The risk of death or serious injury can be greatly reduced in a rollover crash by the use of seat belts.

Since most rollover crashes involve single vehicles they are often preventable.
NHTSA offers the following tips for drivers to minimize the risk of a rollover crash and serious injury or death: