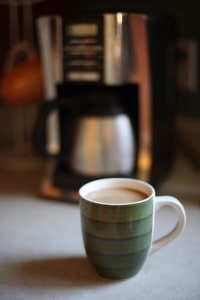 Truck drivers spend hours a day on the road moving goods from place to place. Unfortunately, the monotony of the trip coupled with long hours can result in drivers getting drowsy and even dozing off. This is extremely dangerous, as a truck driver who falls asleep behind the wheel could cause a serious or even deadly crash.

Our Atlanta truck accident attorneys know that there are rules in place intended to limit the number of hours drivers work in order to prevent accidents caused by fatigue. A new study also shows that something besides simply limiting drive time could play an important role in preventing truck accidents.

It should come as no surprise that coffee keeps people awake and that caffeine is a stimulant. However, it may be surprising to some to realize just how big of an impact caffeine can make on preventing truck accidents that occur due to fatigue.

According to Edmunds.com, a new study was conducted by an Australian researcher named Lisa Sharwood who works at the George Institute for Global Health. Sharwood’s study revealed that consuming a drink with caffeine in it could reduce the risk of a long-haul truck driving crash by as much as 63 percent.

This is obviously a dramatic decrease in the accident risk for a truck driver who is traveling long-distances. As a result of the major decrease, Sharwood indicates that the use of caffeine should be part of a wider strategy. Caffeine alone is not a “silver-bullet” solution to keeping the roads safe, but it can work in conjunction with drive-time limits in order to help ensure that drivers don’t dose off as they are operating their vehicles.

The Dangers of Drowsy Driving Crashes

Drive time limits that set the maximum number of hours a trucker can drive are one part of the effort to curb drowsy driving crashes but these limits alone are not enough. Even a driver who takes sufficient breaks could still become tired, especially if he didn’t get a good night sleep on his rest period for whatever reason.

Any efforts to stop drivers from falling asleep should be considered because a drowsy driving crash can have such serious consequences. A driver who doses off for even a second could veer into the wrong lane and cause a head-on crash. The driver could also drive off the side of the road or into cars that are traveling next to him. A sleepy driver is also less likely to slow down, which would at least reduce the force of impact.

But relying on coffee instead of common sense and a good night’s rest is a real good way to increase the risk of a crash. These vehicles are already a risk to other drivers forced to share the road. Ensuring a well-rested, professional driver is at the wheel is the minimum that should be expected when it comes to safety.